When is the last time you wrote a letter? Not to ask for something but just to say something? October is always a special month for us; it holds our eldest boy’s birthday and our wedding anniversary in its autumnal grasp. So, when the leaves begin to fall and my breath puffs in foggy clouds in the mornings, my mind is always thrown back to either pre-wedding jitters or pre-birth jitters!  In October 2006 I could not fathom how the ‘person’ that kicked and punched with such conviction inside me could pass through me leaving me intact (!?)  Suffice to say, he arrived safe and well and I fell head over heels in love as soon as he was slapped on my chest; bloody and gooey and looking a bit worse for wear.  I remember it so clearly, so very clearly… and yet  the calendar tells me it was almost nine years ago?!

Those early years were a head-on collision in life lessons for us. He was an unplanned pregnancy. I had no inclination for children at the time – one day – yes, but not until much later. My husband and I had had a whirlwind romance, he’d lost his mother, we’d got married, we’d moved house and moved in together, a lot had happened – quickly. It was time to slow down, not speed up towards the monumental step of parenthood.

Anyway, thankfully sometimes life just gives you what you don’t realise you need. The first few years of our marriage were rocky and he was the reason that held us together, he was the reason I wrote my first book, he is the reason I’ve tried harder at life, ever since. He has grown tall and strong, if I’m lucky I have another two years before he eyeballs me. Now, he is more likely to piggy-back me, than the other way around. My little chunky blonde-haired boy lurks amid the dusty confines of my memory, but he is out of reach. I know he existed because I can see him locked inside photograph frames, but I cannot match him to the tall, handsome, big-toothed boy who rolls his eyes at me despairingly with his theme-song of, “MUUUM!”

Why can’t I remember? Why can’t I summon up that little boy from the depths of me and remember the smell of him, or what it felt like to carry him, or hold his little hand in mine? Sometimes, I think I do remember, but it seems so implausible that all these years have passed and that little boy has been and gone.  That is why I am so glad I began writing him letters. Eight years  ago, on the eve of his first birthday, I wrote my boy his first birthday letter and I’ve written one every year since.  Now, faced with the tragic holes in my memory, I am grateful because I have no idea what I wrote to him back then when he was still aged by weeks and months. Because you forget all the little things. Our memories wipe over so many of the tiny details. My letters record the changes in him in the intervening twelve months, his interests, where we’ve been, what we’ve done, how our relationship has changed, how he is growing away from me step by step. 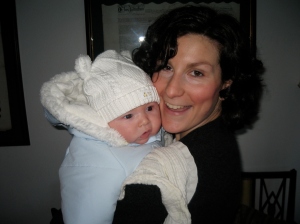 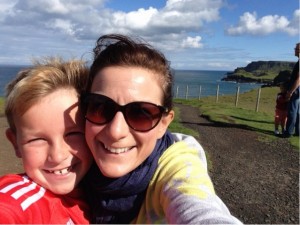 I imagine presenting him with my secret bundle of letters, the early ones all dry and onion skinned with age, when he is twenty-one.  I know he will have grown away from me almost completely by then, we’ll have weathered many more storms together and perhaps I will just be an embarrassing motherly irritation to him (heaven forbid) by then. But they will be my love letters to him; each one recording invisible memories telling him how much he has been loved. They are a testament to the power of the written word, I wish I’d done it for my husband too. Who could you write a birthday letter to?