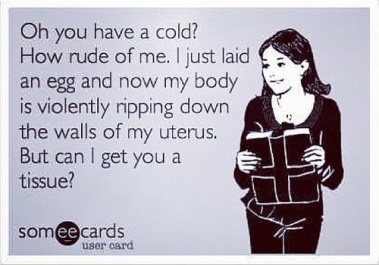 When we meet my main character, fair to say she’s having a bad day. The kind of day millions of women have every month. It might put off some squeamish male readers but f**k it, my market is women’s fiction. My readers are going to be predominantly women, so I’m writing for them. Here it is, I’d love to hear what you think; good and bad.  Would you part with cold, hard cash to read more? I’m hoping ‘The Curse’ turns out to be a blessing for me.

The blood, when it came, was always a relief. She told herself they took adequate precautions, but in truth, she knew they erred on the side of carelessness too often. Anne had felt wound up for days; the smallest aggravation made her disproportionately angry, or ready to burst into frustrated tears.  Recently, she’d noticed it getting worse. She felt as though she was at the mercy of her emotions and was in danger of becoming a female parody, or even worse; more like her mother. On top of her pre-menstrual tension the death of her beloved Gran three days before meant she was experiencing adult grief for the first time. This wasn’t like anything that had gone before; it had shaken her to her core and she hadn’t known what to do with the unfamiliar feeling. The bleakness perched on her heart, its claws digging sharply into her soul’s centre. If she didn’t know better she might think that is where the blood was coming from. Maybe it was coming from both places? Maybe her body was bleeding for herself and for her grandmother? Anne knew she should paint to try and make sense of her myriad of incommunicable feelings. That’s what they’d been taught at Art College, ‘to paint through their experiences.’  She should. But she knew she probably wouldn’t.

She reached for her bag and located her small cosmetic purse. Nowadays, manufacturers try to dress-up woman’s monthly bloody mess in happy yellow or pink parcels, as a way of getting around the rather ugly, uncomfortable inconvenience of shedding an internal lining every four weeks. Advertisers show women jumping with glee and smiling idiotically as they trampoline through their periods while pouring blue liquid on sanitary pads to show their superior absorbency. Anne had never found anything blue coming from her uterus. On TV and in magazines ‘The Curse’ was transformed into an unrecognisable delight. Yet more bullshit, thought Anne.

Anne’s relief had quickly washed way to leave a hollow feeling. Her body was reminding her that she was empty inside, nothing was growing there, and perhaps nothing ever would. Anne had never had a desire for children so she couldn’t understand why this bothered her – but it did. Lately she’d become aware that she desired more from life, but she didn’t know what. Maybe it was just another strange by-product of death. Death. The cold, hard insurmountable fact of it was staring her in the face. Her grandmothers’ funeral was at 12 noon. Her indomitable and sagacious ‘Gran’ was gone. Anne had not seen her in over two weeks. She should have made the effort to visit more, much more. Anne was learning that was another thing death was good at; it was good at making you regret.

5 thoughts on “Reverse The Curse!”