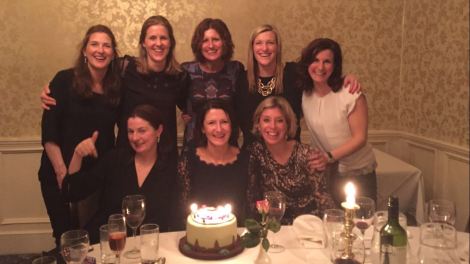 “If you wanna be my lover, you gotta get with my friends.“

There are many reasons why I’m glad to be a girl / woman (what are you supposed to call yourself at 39yrs?) And one of the top ones is because of my girlfriends. Men can’t do girlfriends the way girls can. It’s something we’ve got all to ourselves, like growing other humans, they’ll never be able to do that either.

For many of my crew (including myself) 2016 is the year our lives rolls over into our 4th decade. Cue lots of parties and excuses for weekends away, the first of which took place last Saturday for Naomi who has been my BF since I was in double-figures and has enriched my life in countless ways. For twenty-four hours I was surrounded by amazing women, ate great food (that I didn’t have to cook myself), drank lots of champagne and danced to the wee small hours. What can I say? My cup runneth over.

When I am surrounded by my womenfolk, most of whom I’ve known for at least twenty years, I defy my 5″ 2inches and become 10ft tall. It feels as though time has stopped and not a day has passed since we were all teenagers, or bright young twenty-somethings. Whether we see each other every week, every few months, once a year, or for those even further afield (JAM I’m looking at you and counting down till August!) less than that, we can still pick up exactly where we left off and run from there. Why? I hear you cry. Because that’s the power of love; it’s ageless. When we fall in love the clock stops. Think about it: if you’re married your partner remains the youthful version of themselves they were when you met, our children remain the babies they were when they were placed in our arms, our parents remain the same fresh-faced versions of themselves they were when we were growing up. And so, I’ve concluded, it’s the same with  girlfriends. We never age. We are exactly how we have always been to each other.  How beautiful is that?

I am blessed to have an amazing bunch of women that I am lucky enough to call my friends. They are smart, beautiful, stylish, they have proper jobs (unlike moi): I’m talking solicitors, teachers, barristers, a few of them even run their own businesses -for example-  have you ever wondered what Ireland smells like? Well then you need to check out www.bogstandard.ie My friend Alix started it at Uni way before scented candles were even ‘a thing’! A real-life mum-preneur and she still manages to read every crap draft I send her and give me honest, detailed feedback! There’s also a professional equestrian rider among the mix who does some seriously gutsy stuff on horseback and manage three kids. And that’s only the tip of the iceberg – you get the gist. A-MAZING! Some have been to hell and back, some are married, some are not, some have children, some have not. But we have all had our ups and downs. And we are in this together. We started out in unison; wide-eyed and bushy-tailed and now forty years into this thing called life we are all a little bit wiser (sometimes!) and plan to party the heck out of 2016. In a world where older women are deemed insignificant and  invisible we’re not going to be put on a shelf, we’re not going to be silenced and we’re not going down any hills!  It’s only the start of our 2nd Act and it’s going to be girl power all the way!

Put in a call, text, or send a cartoon picture of a cat to a girlfriend just to tell her she rocks! 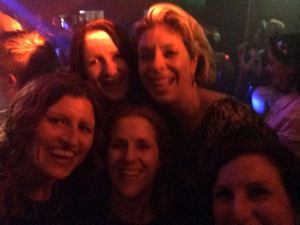 The grainy night-club shot when we all should have known better!

2 thoughts on “Friendship and turning 4-OH.”